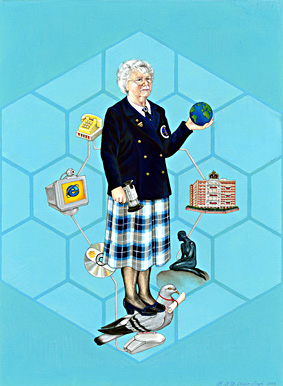 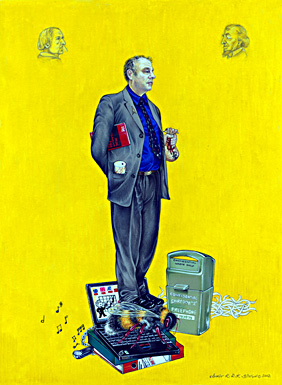 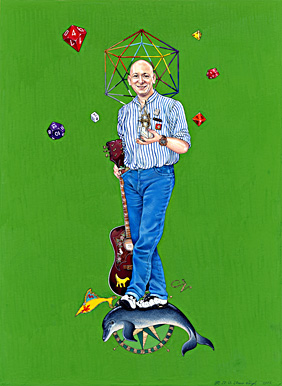 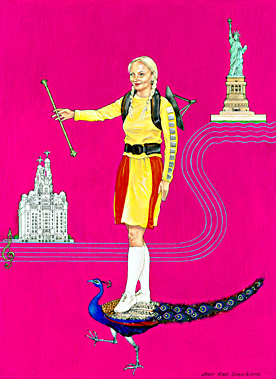 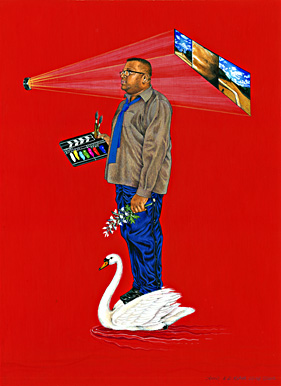 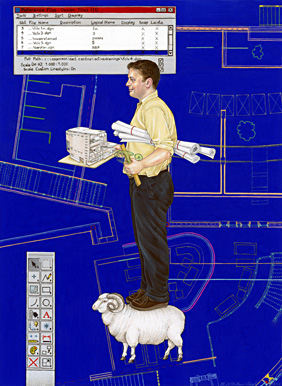 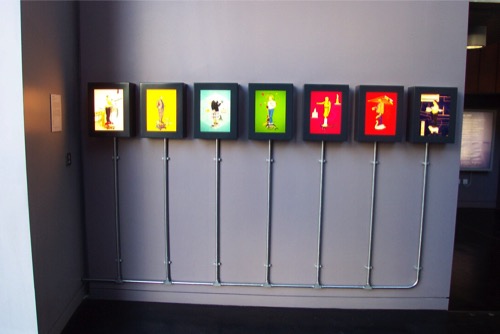 This commission was  developed to provide a specific feature for the centre, one that will actively portray the people who represent aspects of the life of the FACT building. The commission has been developed as a deliberate antithesis to the expectations visitors may have of the work of FACT, as it is based around the finely detailed painting work of Amrit and Rabindra K D Kaur Singh.

The concept for the work is based on an adaptation of the external lighting colour scheme, one of the recurrent motifs of the building, which uses a sequence of colours based on the television test pattern. This pattern is used as a backdrop to a series of small portraits of people involved with aspects of the life of the building. The portraits use stylised and allegorical imagery based on 17th century Mughal portraiture. The final works have been reproduced as high quality transparencies for lightbox display within the building, providing 7 small intensely coloured moments within the muted palette of the building.

Each of the portraits focuses around one of seven key themes that have been chosen to represent the facets of the life of the FACT building; vision, design, construction, finance, creativity, connectivity and welcome. While each image represents a definite person, each of these people has also been chosen because they represent one of the facets of an undertaking such as the FACT Centre project. While some of the detail within the portraits is a literal representation of the life and interests of the person depicted, some of the symbolic content reflects the imagery uncovered through the research process and may require further illumination. The following information from the artists therefore provides some brief background on each of the portraits :

Billy is one of the large team of people who have been responsible for the physical construction of the FACT building.

Holding: Hammer (traditional symbol of construction/creative act), Sword (symbol of leadership - also, the sword is made of steel – one of the objects Billy chose to represent himself).

Geoffrey has been the financial advisor to the FACT Centre project.

Animal/Insect: Bee. Symbolises economy and thrift. A traditional symbol of diligence and prudence – one often used by Banks.

Holding: Money bag (with hands firmly on the purse strings) and book on Management for Accountants - both further symbols of Geoffrey's role as Accountant. Coffee - one of the objects chosen by Geoffrey

Olga is one of the people involved in the tenantspin project – the UK's only internet broadcast channel run by the tenants of high-rise tower blocks, the studio for which will be based in the new FACT building.

Background colour: Cyan. Chosen because it often represents the colour of sky and sea. This symbolically links with tower block housing as comfortable streets in the sky and also with Olga's association with the WRENS.

to physically fly long distances to convey its message.

Other: In the background is the tenantspin logo. The objects (connected by the wire of the mouse) surrounding Olga symbolise Coronation Court (represented by the tower block with crown on top) and the communication facilities/tools provided to its residents as part of the Superchannel project. The famous sculpture of The Little Mermaid in Copenhagen features as a reference to the Denmark-based company that helped develop the project and the fact that tenants were taken on a visit there. The mermaid also appropriately links in with Olga's service in the WRENS.

Holding: Video camera and globe (symbolising the global communication at Olga's fingertips made possible by the communication technology of today and as provided at the FACT Centre).

As much a tribute to the memory of Roy (who was Co-Chair of FACT during the early stages of the project) by those who knew him, this portrait is perhaps a bit more personal than the others in that it seeks to portray his character and personality as much as his direct role in the FACT project.

Background colour : Green - symbol of vitality of life and immortality. Therefore, we feel, an appropriate colour, for Roy who (as it was made so clear to us in talking to those that knew him) had a love of life and its challenges and who will continue to live on in their memories of him.

Animal/insect: Dolphin - known to have the ability to reason, the dolphin symbolises intellect. In mythology and fairy folklore dolphins guide souls to the land of the blessed as well as ships to safe waters. Beneath the dolphin is a compass that symbolises Roy's pioneering work in the field of computer navigation. The numbered shapes floating in the background also relate to this.

Holding: An award he received for his work - a symbol of the recognition of his work which was important to him.

Guitar - symbol of the importance that music played in Roy's life.

Apple (in jeans pocket) - symbol of Apple Mac logo - but also associates Roy with great visionaries/thinkers of the past – in particular, Isaac Newton.

Other: Shark (swimming beside dolphin) - reproduces the shark on a Frank Zappa lapel pin owned by Roy. Symbol of Roy's particularly keen interest in Zappa's music. Geometric Diagram (an icosahedron), a shape that represents one of the many 3D geometric structures that Roy made. Placed behind Roy's head this serves as a halo/nimbus - traditional symbol used to denote someone who has passed away but also symbol of respect for a person (living or deceased).

Gina is the leader of a troupe of majorettes who have all recently taken part in a video project with the New York artist, Kristin Lucas, due to be shown at FACT in the summer of 2003.

Background colour: Pink. Traditional colour associated with the female and therefore appropriately reflects the video project Gina is involved in which focuses on groups of young women from Merseyside.

Animal/Insect: Peacock.  The emblem of wisdom, music and poetry in Indian mythology and therefore fits in with the theme of the music- based project which uses songs, written by girl bands in Liverpool. Also, the peacock is famous for its dance in which it parades its feathers. Its performance is both colourful and has an air of showmanship about it - qualities that are particularly associated with brass band acts and marching troupes.

Wearing: Majorette uniform and twirling a baton - a very overt notion of welcome.

Other: In the background are the Liver Building and the Statue of Liberty. These obviously represent the cities of Liverpool and New York, but more specifically these are the most famous landmarks seen at the port of entry for each city and which welcome‚ visitors on their arrival - thus symbolically reinforcing the key theme of the portrait. The landmarks are connected by a water (representing the Atlantic) which also doubles as a music score (representing the musical nature of the project that has brought the two cities together through artistic collaboration).

Isaac is an internationally renowned artist and film-maker and is the first artist to show in the building's galleries.

Animal/Insect: Swan. Associated with arts and intellectual discourse in traditional Indian iconography. (This symbolism particularly reflects the educational aims of the Sankofa group in that they create an intellectual context for the reception of their work in order to generate a discourse around it.)

Holding: Acanthus flower - symbolises veneration of the arts in Mediterranean countries. Clapper board and artist's palette and brushes combined – This represents the crossover of theatrical cinema into the gallery space - artist and film maker combined. (The colours on the palette are the seven colours of the TV colour test pattern).

Other: An example of Isaac's work is represented as projected in the background.

Jamie has been chosen to represent the building design image. He is one of a team of 4 architects who have been responsible for the design of the FACT building.

Background colour: Blue - the colour of the night sky on which the constellations are mapped‚ out, also visual parallels with architect plans/blueprints.

Animal/insect: Ram - symbol of spring and beginnings in general; creation and regeneration. This traditional symbolism links in with the architect's role as one responsible for the initial conception and visualisation of a new building. On a general level it also serves to symbolise the regeneration of the City of Liverpool as a result of the construction of such innovative buildings like FACT.

Holding: Home-made model of FACT- a symbol of Jamie's personal commitment to the FACT project and the importance that his model had as a reference for the builders on site. Rolls of paper - represent architect plans. Set square & compass - traditional tools of the architect's trade.

Other: The background shows the architect plans of the FACT Centre on a computer screen. Particularly highlighted is the floating tool box‚ which serves to contrast the sophisticated design tools used by architects today with those equivalents used in the past (as held by Jamie) - a reminder of modern day advancements in design technology.