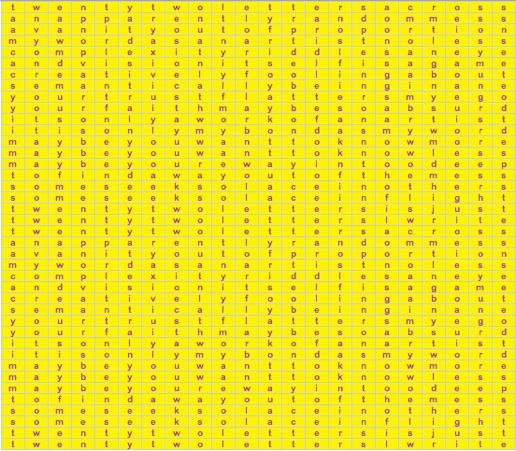 Taking its cue from the 22 video channels of the Threshold Wave, each screen becomes host to a word from an artist’s poem about the bond of trust that exists between artist and audience.

Commissioned and acquired for the Horsecross collection of contemporary media art. Shown as part of Primary Ingredients, a major new exhibition at Threshold artspace which premieres five new commissions by Vuk Cosic, Alec Finlay, Clive Gillman, Katja Loher and Valentin Stefanoff showing alongside works by Perry Bard and Krassimir Terziev in the context of twelve works drawn from the Horsecross collection. Featured are sixteen artists from nine countries who employ text – anything from letters and symbols, poems and stories to books and films – as primary ingredients in their visual grammar. Their works allow us to go beyond the omnipresent debate whether text gives artists the opportunity to be more direct than they usually are with images. A fresh opportunity to test our assumptions that words have cognitive primacy in the brain of the viewer.